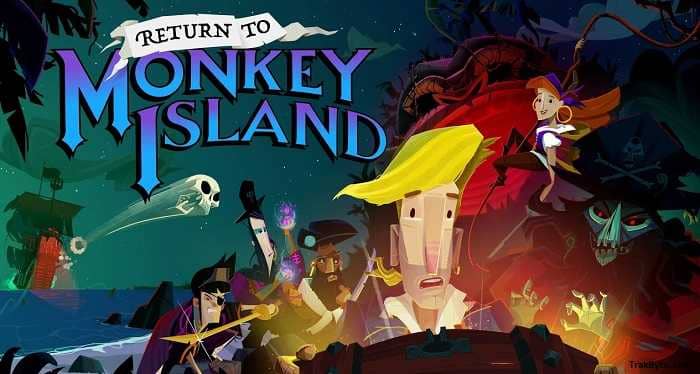 In this article I will tell you that How to solve all three monkey problem in Return to Monkey Island game. This is the moment that some people is waiting for, and it is coming after long time, and it’s been a really while. when Guybrush has came back to Monkey Island, there’s no way to stop him from exploring the island. Unless, of course, there are a lot of mysteries that also ought to be unraveled. It is important that you do not allow the games final hurdle dissuade you from reaching the great conlusion which is waiting for you in Return to Monkey Island.

On Monkey Island, all you have got to try and do to induce to the caves below the monkey head is follow the route till you get to a fork within the road and read the sign that claims you need to be a member of a pirate crew in order to continue. After that, you’ll be able to carry on to the caves. In this game, there are 3 difficult puzzles that involve monkey statues. Below, I am going to give the solutions of these Return to Monkey Island game puzzle.

Here I will tell you solution for Return to Monkey Island game puzzles. If you are feeling that it will hard but I will give you easy solutions. All these solutions you can find on other webiste and blog also.

How to solve the first monkey statue puzzle

This starts with the room on right, you will encounter multiple statues all missing something. So what they needed listed below:

1. First, Put the empty grog mug on the monkey’s hand.

2. Second, Place monocle on the monkey’s hand so he can see better.

3. Third, before leaving, pick up the pebble.

4. Forth, you stab the hand of the frustrated monkey.

5. Fifth, go into adjacent room and pick the coins.

6. Sixth, use crakers on Mokey and parrot statue.

7. Last seventh step, before leaving, you will strieve items which belongings from the statue.

How to solve the second monkey statue puzzle

After getting bottom down of stairs, a new challenge will begin.

1: In the first step, you should Grab the coins before going right.

2: In the Second step, Pick up the stone from the first room.

3: In third step, Go all the way to the third room and retrieve another pebble.

7: In seventh setp, Deposite your coin to the captain monkey’s treasure chest.

8: In lst Eight step, Take the coins back and go down.

How to solve the third monkey statue puzzle

This is the final puzzle of Return to Monkey Island game. So all the piece present here for the last puzzle. If you are bloodthirst, you may be able to figure it out.

1. In the first step, Use the knife on the sad monkey statue.

2. In the second step, Use your knife on statue of screaming monkey.

3. In the third step, Fill you empty mug on the statue.

4. In the last Fourth stage, To fill the mug, put your empty mug below the broken statue.

1. Which of these is not an island in Monkey Island 2?

2. The game of Monkey Island used to be called…

3. Which of these ingredients is not needed to get to Monkey Island?

4. In Monkey Island 2, who had a glass bottom boat

5. The volcano on Monkey Island is filled with.